*Cover with plastic wrap, tightly sealed around the entire top of the guacamole so that no air can get it, will prevent browning for a longer period of time

1 bunch Cilantro, washed and rough chopped (half uses for pico and half set aside)

3-4 cups stock or broth from stewed meat made ahead

Spoon a bit of dough into a bowl of water, if it floats, it’s done, if it sinks, it needs more liquid, more fat and more mixing, best when using stand mixer.

Begin to roll the husk into desired tamale shape like a burrito, enclosing all contents like a package

Steam for 40-45 minutes, let cool for 5 minutes, open; add sauce and cheese and most of all…Enjoy!

Combine raspberries, blueberries, strawberries, sugar and lemon juice in a saucepan and heat until fruit is softened and berries release their juices. Continue to simmer until the liquid is reduce by half. Remove from heat and puree in food processor until smooth. Strain through a sieve to remove any seeds and stir in liqueur or orange juice. 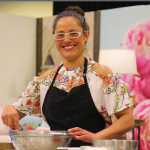 Thank you for subscribing to my blog!

We respect your privacy and take protecting it seriously. Please email me if you subscribed in error or would like to be removed from the list.